Aunt Laurel came over to help us carve pumpkins.  Later we made fly-swatter cookies. 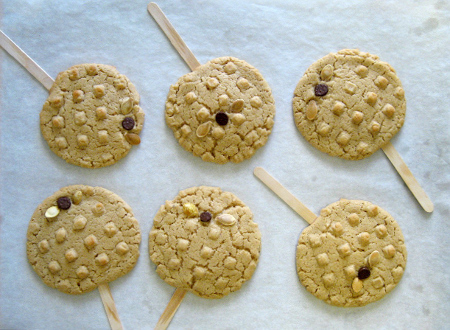 They started out as peanut-butter cookies (actually cashew-butter) but rather than press them with a fork as usual Laurel thought we should use this spatula that had square holes. I observed that they looked like we'd used a fly swatter to press them so we put chocolate chips as flies. We had some roasted pumpkin seeds Laurel put on as wings. Noah suggested we should put licorice for the handle (this would not go well in the oven so we used popsicle sticks). The wings looked more lively before the oven but the end result looks more like the flies had been swatted. Delicious.